By now, you’ve probably seen the #hashtag video with Jimmy Fallon and Justin Timberlake. I’ve included it below for the 10 of you who haven’t yet.

I debated showing the video to my kids and decided it was fine. The only bad word/part is bleeped. Isabel would probably figure it out. Ryan probably wouldn’t. My take on bad words is that regular words can be worse. I’d rather my kids say, “Oh, sh*t!” than, “I wish you were dead!”

Of course, the kids thought it was hilarious, watched it four times, and asked me to e-mail the link to them. That night, while we were snuggling in my bed, I told Ryan I had e-mailed it. He jumped from the bed and started down the hall to go watch – “Not NOW, Rye! It’s bedtime!”

Then, knowing how excited he was to watch it, how much he loves to share a good joke, and that his grandparents were picking him up the next afternoon, I added, “But don’t show it to Grandma… since it has a bad word at the end.” (I’m pretty sure my mom is less bad-word tolerant than I am. I’ve never tested that theory. Not starting now.)

He looked at me quizzically, his face saying, “Huh? You crazy, Mom.”

He looked at me, kind of shocked. I took a second to realize the problem. We both busted out laughing. Like crazy people!

We were privately in hysterics for a WHILE, until he HAD to go and tell Isabel, “Mom said the F-word!” Yeah, he loves to share a good joke. 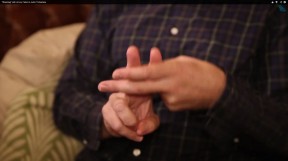 Tags: family life
← Little Sneak
When did *this* start? →